Area classification is a method of analysing and classifying the environment where explosive gas atmospheres may occur. The main purpose is to facilitate the proper selection and installation of apparatus to be used safely in that environment, taking into account the properties of the flammable materials that will be present.

Regulation 7 of DSEAR requires that the employer should carry out classification of areas where an explosive atmosphere may occur.

The basic elements for establishing the hazardous zone types are:

HAC Studies are a specialist area of engineering and are not an exact science with definitive solutions. Several methods of system analysis may be deployed, and consideration should be given to all available generic and sector standards and guidance documents.

Gas Technology Partnership can carry out Hazardous Area Classification Studies for gas/vapour flammable atmospheres. We use the latest EN standards (e.g. BS EN 60079-10, BS EN 61241-10) in addition to sector standards where these are more appropriate (e.g. IP-15, SR/25, etc.). It is sometimes necessary to revert to calculation of area hazardous extents using numeric methods where generic and sector standards may not provide adequate coverage. 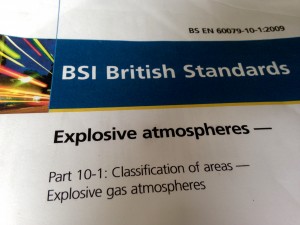 Gas Technology Partnership is pleased to announce that it recently became a member of the British Compressed Gas Association.
BCGA is a not-for-profit Trade Association, representing the interests of about 70 member companies:-
• manufacturers and suppliers of bulk liquid and cylinder gases
• manufacturers of cylinders, vessels and tanks for their storage and distribution
• manufacturers of equipment for controlling the application and use of gases
• installers of distribution pipework and systems
• providers of specialist safety, health, quality, inspection and training services
– Which they do through dialogue with relevant Government Departments and Agencies, Standards Organisations and other Trade Associations.
They were established as BCGA since 1971, having previously existed since 1904 as the British Acetylene Manufacturers Association.
BCGA’s Mission is to ensure safety in the use, storage, transportation and handling of industrial gases, which they do in part through their many respected publications.
The term “industrial gases” refers to gases such as acetylene, argon, ammonia, carbon dioxide, chlorine, hydrogen, oxygen, nitrogen, etc., used in a wide range of applications.
It also covers speciality gases and equipment used in the electronics, food, scientific and medical sectors. BCGA does not represent the interests of the compressed air or natural gas industries.